Growing up, I was happy and optimistic; eventually along the way I lost myself–then worries and anxiety took over. I would have to say some of my happiest times only came when I’d escape and travel. During my first trip to Europe, I found one of my happiest places on earth, a place that reminded me that life is worth living: Zermatt.

Zermatt is the stuff of Instagram dreams. You often see it pop up as a dreamy-looking town overshadowed by the glorious snow-capped peak of the Matterhorn. Other people do a silly thing where they match up Toblerone with the Matterhorn, since the chocolate uses the Matterhorn as its logo. Zermatt is a place that can easily be overlooked–in my case, I saw some pictures and was awestruck, but then forgot about it as well as had trouble finding it since I only had the picture, and no town name. So, much to my excitement, years later I rediscovered the town on my itinerary for my Trafalgar tour of Switzerland and Austria.

I didn’t know what to expect, but I fell in love with Zermatt from day one. Zermatt felt like an oasis away from stress and anxiety since, although touristy, it’s quaint, refreshing, and beautiful. Although I was visiting in October, there was a refreshing chill to the air rather than freezing winter temperatures or oppressive summer heat. I walked around the town for hours admiring the shops and the flowers boxes on the buildings. On my first evening there, I was caught in the rain and even though I was getting wet, it still felt magical walking around in the glow of the streetlamps, and I quietly sang to myself, “Just Singing in the Rain” and shamelessly posted the video on Instagram–I wanted to share my joy with the world.

I’m thankful I had a tour, since it wasn’t easy getting to Zermatt. We had a long bus ride, and then we had to park the bus farther away from the village and switch to small vehicles to drive up there. Part of Zermatt’s charm is it’s a car-free zone, the only transportation approved are little taxi vehicles and carriages. However, the town is on a train line, so theoretically someone could arrive by the Glacier Express .

We stayed at the Ambassador Hotel Zermatt. It was cool since it was like a ski lodge. We had a particularly good time joking with their bartender one night, who had a great sense of humor and was very attentive. I took advantage of the hotel’s pool and hot tub (there also was a sauna and showers). The hotel was perfectly situated so that you could walk from the bottom of the town all the way up, or if you were up for a trek, you could walk to the ski lifts. My only gripe with the hotel was that there was mold in my room’s bathroom, but I just suffered with it instead of trying to address the situation. My tour guide later said I should have mentioned it right away to see if we could have found a solution.

I don’t particularly have anywhere to recommend for food. I did kinda like Homemade Café and Shop, but I didn’t eat anywhere that I’d highly recommend. I splurged on one fancy dinner one night, but aside from the ambiance and the magic of being in Zermatt, it wasn’t the most amazing food I’d ever had or anything. 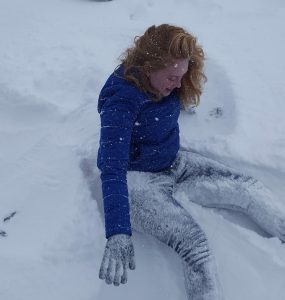 One of my happiest memories of Zermatt was visiting the Matterhorn Glacier Paradise. We took ski lifts up to an observation deck/shop/restaurant/information area nextled in the Alps (note: the restaurant has exorbitant prices, but it’s understandable due to its location). People can go skiing, snowtubing during the summer, or looking around.  I’d never been on a ski lift and I hadn’t seen snow for years, so I had minutes of pure bliss as I played in the snow, caught snowflakes on my tongue, and made a snow angel for the first time since young childhood. Although we couldn’t see the Matterhorn due to the weather (which also prevented people from skiing), it was an amazing place to visit. We also looked at the Glacier Palace, which had cool ice sculptures. Although it was a pricey expedition, it was worth every penny (I paid through Trafalgar, but usually it’s 100 Swiss Francs–100USD or more, depending on what the current exchange rate is).

All too soon, it was time to leave Zermatt and move onto our next destination, but the time I spent in Zermatt was truly magical. Although it can be a pricey excursion depending on where you stay and what time of year you visit, Zermatt is a location that isn’t to be missed. I hope I can return one day, for Zermatt is truly one of my favorite places on earth.

Anxiety and Travel: How I Travel Despite Anxiety

Sharing the beauty of Montana and beyond with the rest of the world. Follow me if you love travel and adventures that are sometimes simple, sometimes grand, and sometimes near, sometimes far.

This website uses cookies to improve your experience while you navigate through the website. Out of these cookies, the cookies that are categorized as necessary are stored on your browser as they are essential for the working of basic functionalities of the website. We also use third-party cookies that help us analyze and understand how you use this website. These cookies will be stored in your browser only with your consent. You also have the option to opt-out of these cookies. But opting out of some of these cookies may have an effect on your browsing experience.
Necessary Always Enabled
Necessary cookies are absolutely essential for the website to function properly. This category only includes cookies that ensures basic functionalities and security features of the website. These cookies do not store any personal information.
Non-necessary
Any cookies that may not be particularly necessary for the website to function and is used specifically to collect user personal data via analytics, ads, other embedded contents are termed as non-necessary cookies. It is mandatory to procure user consent prior to running these cookies on your website.
SAVE & ACCEPT